Upside Down with CF: Are Yoga Inversions Helpful or Harmful? 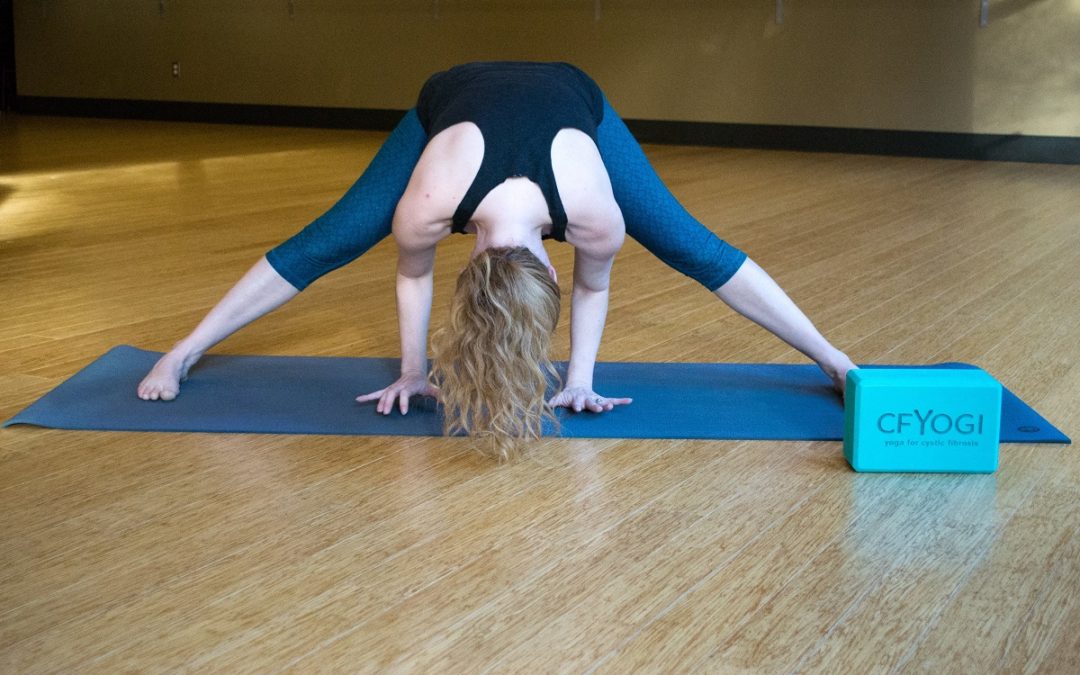 If you’ve been following along in our classes at CF Yogi this year, you’ve probably heard us ask at the beginning of class about certain CF-related complications, so that we can offer modifications and alternative poses.

One of the symptoms that we ask about is acid reflux, which is extremely common in people with CF. Among the numerous digestive symptoms and complications that can accompany cystic fibrosis, it’s one that sometimes gets overlooked. And “silent” reflux, which you might not even know is occurring, can be a lurking threat.

Whether you have CF or not, one of the core principles of yoga is to do no harm. And one of those things that’s a little controversial in the yoga for CF community is whether yoga inversions are more helpful, or harmful.

What are the risks of inversions?

An inversion is any position where the head is below the heart . . . put simply, these are poses where you are upside down.

Personally, I’ve been upside down a lot in my life! In fact, when I was a kid, it was a routine part of airway clearance to lie upside down on a board while my parents administered CPT — manually when I was little, and then with a handheld percussive device when I got older. The thinking back then (in the early-mid 1980s) was that this inversion would help with airway clearance because gravity could help pull the secretions downward, so they could more easily be coughed out.

Nowadays, science has progressed and we know that that’s not necessarily a good idea. We understand a lot more about acid reflux and the related role that it plays in inflammation and infection of the airways. Clinicians no longer train people to do inversions during airway clearance.

Why? In addition to simple inflammation of the esophagus that can occur from the stomach acid getting up there, people with CF face an additional threat from bacteria that may be present in those fluids.

If the reflux gets up to your airways, and there’s bacteria in that fluid, and it gets aspirated into your lungs, suddenly you’ve got a much bigger problem on your hands.

With this threat in mind, there are some people – including expert clinicians – who believe that people with CF shouldn’t do inverted postures at all.

Wait . . . really?! Nobody with CF should EVER do a yoga inversion?

There are some very smart people who think so.

But if that’s true, what does that mean for those of us who’ve been doing yoga for years, and who’ve found inversions beneficial for getting themselves un-stuck, physically or mentally?

This is where the conversation gets a bit sticky. * (Ha!)

Personally, even though I know the risks, I continue to use inversions for several reasons in my personal practice:

#2. Inversions give my sinuses some relief. Sinusitis is a bigger issue for me than acid reflux.

#3. When I have something in my lungs that really feels stubborn and like it doesn’t want to move, sometimes an inversion does help it get “un-stuck.”

#4. Inversions are fun and challenging . . . and I love a good challenge.

#5. I don’t typically experience noticeable acid reflux. I did when I was a kid, but the diet I’ve settled into as an adult has left me largely without those symptoms.

I know that reflux can be “silent” and it happen without my knowledge… but you gotta pick your battles when you’re living your own life with CF. If I’m faced with choosing between something that I *know* I personally benefit from versus what *might* potentially cause harm, I am going to choose the benefit 9 times out of 10.

But while I do enjoy inversions, I’m careful to use them in moderation so that I can minimize my risk. I don’t hold them for more than a couple of breaths at a time. I use them together with a flowing breath so they are like an extension of the natural inhale & exhale of my body – working with the breath rather than against it. I don’t do inversions less than an hour after eating, and I don’t do inversions at all when I can tell that acid reflux is present.

One other thing that I sometimes do if I feel on the margin, is to place a yoga block next to me and make sure to place my hands on it when I’m in forward folded positions, so I keep my torso horizontal. It just gives me an extra little reminder that I don’t need to reach all the way down to the floor, and makes the decision whether to go into an inverted position more conscious rather than acting out of habit, “This is what I always do!”

An Educated Decision: Risk versus Reward

While the choice to do an inverted pose is personal, we feel our role at CF Yogi is to help our community learn about the risk versus reward, so that people can make an educated decision for themselves.

This month, Chelsea is hosting our Yoga for Acid Reflux Workshop series, where she’s teaching modifications of some popular flows and poses that you can add to your yoga arsenal.

In this Workshop style class, you can get some one-on-one time with Chelsea to talk about the ways you can modify poses for yourself, and get an outside perspective on your alignment so you can feel safe while you practice.

We incorporate modifications for acid reflux into our everyday yoga classes at CF Yogi too, but if you want a little extra education on this topic, this is a great opportunity to dive a bit deeper.

In our daily lives, CF is always changing, so we’re happy to help you put some tools in your toolbox that might come in handy along the way!

Join Chelsea’s Yoga for Acid Reflux Workshop on Wednesdays at 10 AM Pacific / 1 PM Eastern during the month of September! Then apply what you learn during Kripalu Yoga with Heather on Sunday at 3 PM Pacific / 6 PM Eastern.

Not signed up yet for our FREE virtual yoga classes for the CF Community? Register here!