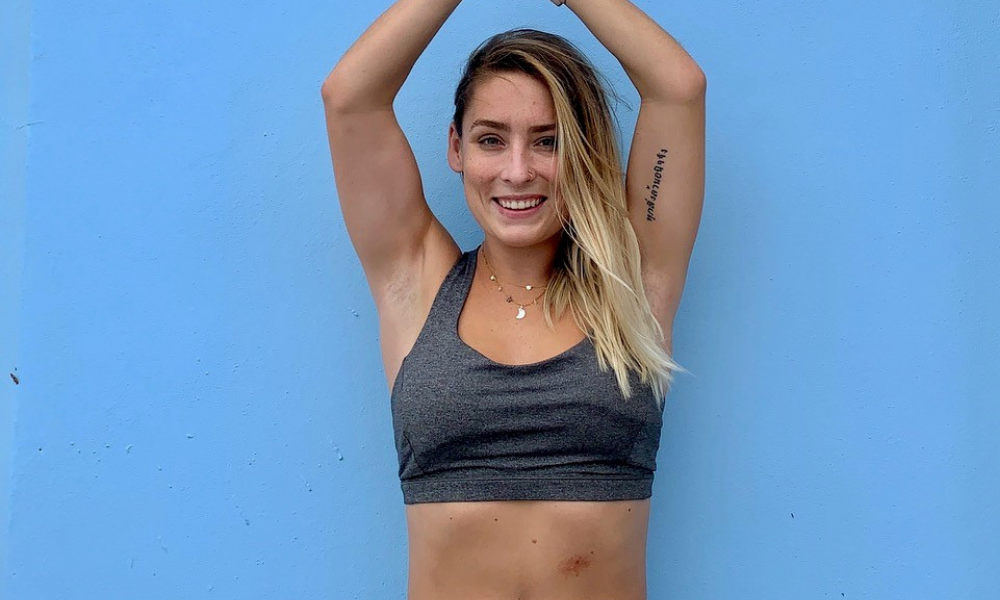 Hi all, I’m Chelsea—A yoga teacher since 2017 and an adult living with Cystic Fibrosis; this is my yoga story.

There I was. Sitting in a hospital bed after overhearing my doctor say, “I don’t know if we can bring her out of this.” Tubes running out of me, cold IV fluid steadily being pumped into my veins. Staring down at my once-muscular legs now turned to skeletons, desperately breathing in the oxygen that was flowing so high that I could hear the hissing of the cannula. Catching my breath after simply using the bathroom I thought to myself, “This can’t be the end.”

This was the moment I realized that up until this point, I had done everything “right.” Done all the meds, attended every doctors appointment, skipped all the fun events to put my meds first.

And yet, here I was.

It was the moment when my own false narrative that ‘I was doing EVERYTHING I could to fight’ finally disintegrated before my eyes.

That was when I found yoga.

Despite many friends over the years urging me to try yoga, I still hadn’t. My continual response would be, “Yeah, let me try the one exercise centered around breathing when the one thing I’m not good at is breathing!” (Can you sense the sarcasm dripping out of that statement?)

I had to stop viewing the world through the lens of what I couldn’t do, and begin to see what I could do.

After that hospital visit, I couldn’t walk up a flight of stairs, shower, or complete any basic necessity of life without becoming breathless. But I now had this fire in my belly to fight harder than I ever had before.

I started with one yoga class . . . and quite honestly hated it. I couldn’t breathe, I didn’t know any of these names they were saying, I was a fish out of water. For a few months I wrote off yoga and began working out at a gym. It wasn’t until I moved to California, one of the quintessential ‘yogi’ places of the world, that yoga kept coming back into my life again and again. I finally gave it another shot.

I went from hating yoga to becoming a yogi seemingly overnight. I couldn’t go to enough classes, learn enough, or immerse myself in the mindset around yoga enough. Over time I began to see my body respond. It was getting stronger; my body could flow longer and longer without taking breaks. I was becoming happier on and off the mat, I started looking at my body more lovingly. Yoga helped me to regain and maintain my lung function (which we know a goal for all of us), but its impacts were much more than just physical.

Yoga helped me learn my own body again, this new body I had. I became more patient and forgiving towards my body’s limitations while gaining gratitude for its abilities.

I began to love myself again, flaws and all.

Sharing Yoga with the CF Community

After seeing the amazing effects yoga had on me and my CF, I knew I wanted to share this tool with fellow CFers who may think what I once did; that CF and yoga don’t mix.

In the fall of 2017 I took my 200-hour teacher training. In the most appropriate CF fashion, half of this training was done on home IVs with my port accessed. Even with an exacerbation, the amount of yoga I was doing made me feel better than I ever had before. That exacerbation was also the first one in years where I didn’t need oxygen, and caregivers were applauding my weight, body, and strength.

Following my teacher training I began teaching in yoga studios, I was able to teach yoga at the virtual event put on by the CF Foundation, BreatheCon, and have also made YouTube videos for persons with CF.

Even with 50% lung function, I am able to lead 60-minute classes, enjoy life, and am not limited by my lungs despite the number. I no longer compare myself to others and instead cherish the abilities of my own body. Through working with CF Yogi I hope to help us all discover our own abilities and love our own bodies.

We may never know a life without CF or its complications, but we can work together to see all the beauty that exists in ourselves and our lives beyond this one element of life we all share.  I hope to see you in class, Namaste!

Join Chelsea for “Flow and Let Go” yoga on Tuesday evenings in June! Not signed up yet? Register now for our free yoga classes for the CF community!